When Jason Pamer and Eric Esau were young boys and going to school together they made a decision to follow the dream of making movies that would change the world. Now, in their late twenties these two young men have released a startling documentary and expose’ of prostitution and human trafficking in the Seattle area. During the holidays  when hundreds of films are released, Rape For Profit made its debut. The premiere showing at Lincoln Square Theatres in Bellevue, Washington was the “most watched” film during the Christmas season going head to head with so many outstanding movies.

Recently Jason and Eric were able to launch another showing in Phoenix, AZ showing the film to students at Grand Canyon University and came away realizing that their film has a gut wrenching impact on college students as students deal with the reality of pornography and using others through prostitution and human trafficking. Jonathan Sharpe, Theology Professor at Grand Canyon University and a screen writer described the scene at the college when the filmed was shown. “We were really startled by the impact of the film on our students. Students were weeping during the film and we had to turn about 100 students away the first night. The second night we had a standing room only viewing too. Word spread throughout the campus that this film was going to change the way you viewed sexual exploitation the rest of your life.” 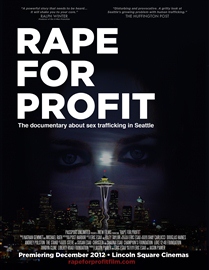 The film, Rape For Profit, is getting national attention and is being viewed now by noted actors, actresses, and politicians as they consider how our culture has been profoundly damaged by the exploitation of the powerful over the powerless. To read more… http://seattletimes.com/html/entertainment/2019898654_movierapexml.html

Jason Pamer recently commented on his encouragement from C3 Leaders: “C3 Leaders has given me a safe place to be real and authentic, it has provided a community of like-minded men that continue to challenge and encourage my heart. C3 Leaders has been instrumental in the development of this film, it is a perfect example of spirit-led leaders impacting the marketplace, specifically the ‘entertainment industry’. I am a better man for it, my wife is happy because of it and my business has been blessed by it.” Jason Pamer, Mew Films (Rape For Profit).

Previous StoryThe New Pope: What does Francis have to do with it?
Next StoryTim Jenkins Co-Founder of Point B, Inc.