Stories about people that have chosen to use their unique gifts to glorify God are both inspirational and instructive. Ralph Palmen is such a man. His life inspired C3 Leaders to create an annual award to recognize a leader who has used his or her gifts over their career to bring the good news and values of Jesus to the marketplace, the mission of C3 Leaders. The distinguished High Ground Award recognizes a person that takes the “High Ground” and by doing so, encourages others to use their gifts of leadership and influence to create a culture with the values of Jesus.

George Toles is a Seattle legend. NBA public announcer, marketing guru, radio personality, networker extraordinaire, and community leader. George was an NBA public address announcer at about a thousand games – two seasons with the Detroit Pistons and nineteen with the Seattle Sonics.  In addition to his sport side announcing, Toles had an outstanding career as a marketing executive, and is founder of His Deal, a twice-a-month luncheon in downtown Seattle where men can discover the person of Jesus in a safe, relaxed environment. 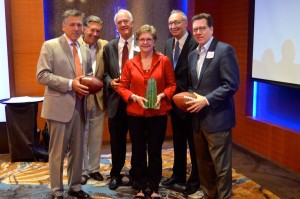 Kendra was the first recipient of the High Ground Award. Kendra helped pioneer the wireless industry having served as SVP of the Wireless Data business for AT&T Wireless (formerly McCaw Cellular Communications) and EVP of Mobile at InfoSpace . She served as COO and President of the Communications Group of Convergys (formerly Cincinnati Bell Information Systems). Kendra was the recipient of the 1999 Catherine B. Cleary award as the outstanding women leader of AT&T. She currently serves as a member of the Board of Directors at both INRIX and B-Square, and has previously served as a board member of a number of other companies. Kendra holds a B.S. Degree in Mathematics from Marietta College and a M.S. in Computer Science from Ohio State University. She has been married to Bill Snider for 34 years and has two grown children, Rich Snider and Bess Navarrete, as well as one grandson, Oliver Navarrete.