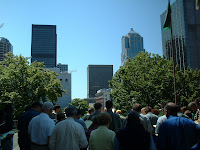 A new Pinnacle Forum was launched at Northwest University on Monday December 14, with leaders doing business or mission globally. Dr. Joseph Castleberry, a Pinnacle Partner noted that business leaders were moving to the forefront in mission. The Seattle area has a reputation of being entrepreneurial and many international Christian leaders believe Seattle has been uniquely positioned to bring God’s grace to the world. One international export/import businessman mentioned that over a thirty year period Seattle has gone from a relatively unknown city to a prominent world city. The first forum discussion centered on the concept of “Seattle the entrepreneurial city and the meaning for bringing change to the world. Two major themes surfaced during the forum were, the role of business in developing infrastructure for the two thirds world and the need for business leaders to develop strong personal relationships that help grow their life and leadership around the values of Jesus.