Don’t stare.  That’s not a bruise and yes, they did wash their face.  That’s charcoal … and your brother or sister. 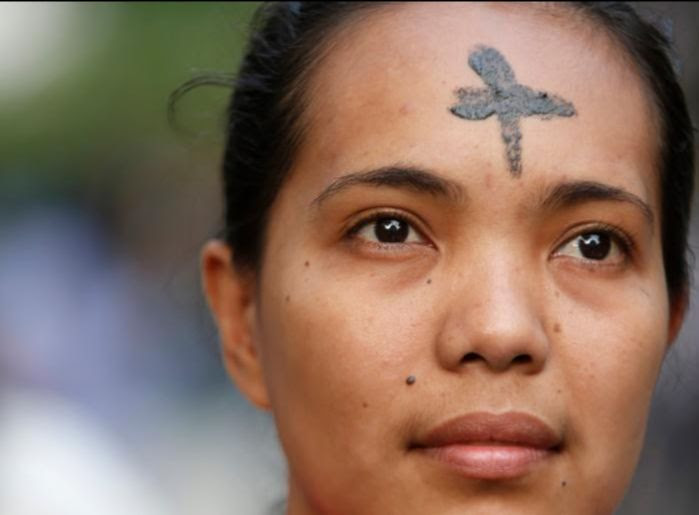 Today you will pass folks with a charcoal cross on their forehead.  It may be dark or, because it’s not supposed to be whipped off, faded.   Those marks mean that our most holiest of seasons has started.

Lent begins today with Ash Wednesday.  Ash Wednesday is a day of prayer and penitence that sends us into six weeks of Lent.  You will find Catholics, Lutherans, Nazarene and other denominations recognizing the day.  Some believers will have repentance ashes placed on their foreheads with the blessing of “Remember that you are dust, and to dust you shall return.”

The tradition is wide and varied…

Whatever may be happening at stoplights, in Iceland and Siberia or in your town, the real question is, what will Ash Wednesday mean for you?

Ted Turner famously called people “Jesus Freaks” in Washington for wearing ash on their head.  A San Diego retirement home supervisor was fired for not whipping the cross off.  And, even 25 years ago, a Georgia police officer was fired for wearing an Ash Wednesday cross.

Ted Turner later apologized.  The policeman was reinstated.  And that retirement home spent time with the Catholic League for Religious and Civil Liberties.

Whatever may be the results and whatever maybe the reaction in D.C., California, Georgia or your workplace, the real question is, what will Ash Wednesday mean for you?

In 2 Samuel, strong but stricken with grief, Tamar put ashes on her head.  A compassionate leader, placed in the right spot, Mordecai led others in morning and the putting on of ashes.  After a long battle, Job flat out repented to the Lord in “dust and ashes.”  And when Jerusalem was under siege, God himself tells people to seek forgiveness by rolling in ashes.

It is obvious that ashes go way back in Biblical times.  And since, at least, the First Council of Nicaea in 325 AD, the action of ashes has been meaningful to believers on this day.  Regardless of history, the real question is, what will Ash Wednesday mean for you?

Is this a treatise for all faith-filled business leaders and marketplaces influences to go out first thing tomorrow morning and get a real dark, lasting, distinct mark of the cross in ash?  No.

This is a request to recognize that tomorrow you are entering into a deeply, meaningful, historically significant day.  It is a day in which for thousands of years, people have sought God.

So don’t stare, unless it’s in a mirror.  Today is a day of reflection.  A day to ask, what will Ash Wednesday mean for me?