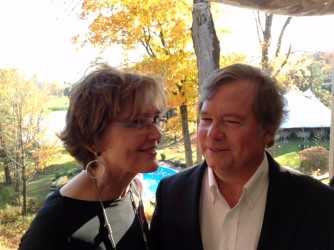 A well-known saying offers that “Necessity is the mother of invention.” If it is, then I offer this twist: “Crisis is the father of attention.” And what gets your attention, gets you.

This characterizes a part of the journey of Daryl Miller, a generous sponsor of our C3 Annual Golf Tournament & Dinner Auction. Daryl accepted Jesus as his savior at 12 at a church camp in his home state of Kansas. But, the pursuit of his education, building a family, and a time-intensive career completely absorbed his attention and he was living more for Daryl than for anything else. Then, at the age of 57, his health took a deep dive and the Holy Spirit said to him, “You’re not in Kansas anymore, Daryl.”

A four-way bypass followed by a sudden and pernicious bout with an aggressive cancer stood Daryl up and got his attention in a harsh way. When his doctor told him in 2011, “You’ve got a month to live,” Daryl quickly summarized his life and figured it was time to make some changes. At age 57, Daryl shifted his focus from “things below to things above,” and it was clear that Jesus got his attention. After just a few minutes with Daryl, anyone could see that his whole outlook is about receiving the love of Christ and shedding it abroad to each and every person he encounters. He rounded the bend.

Married to Elsie for 42 years, and blessed with two amazing sons, Brent and David, Daryl acquired Fischer Plumbing in 1997 and grew it to a thriving family of companies with four separate entities under one corporate umbrella. He spends his time mentoring and guiding the great folks he has working for him and serving on six boards, traveling and golfing, and spreading the love of Jesus. And – he is 5 years cancer free! When asked what one key thing is that he endeavors to achieve in all his dealings with people, Daryl suggests, “Be vulnerable. Be honest. Get their trust.”

To learn more about Daryl and his flagship company, Fischer Plumbing, click here.