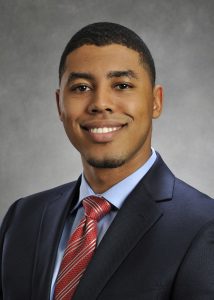 Born and raised in Southern California, David Roberts migrated to the copper state to attend the University of Arizona on a full Football Scholarship. As a Wide Receiver, David would become a 4-year letter winner and multi-year starter for the Wildcats from 2008-2011. A true student-athlete, David graduated with a Bachelor of Science degree in Aerospace Engineering in the spring of 2012.

David currently serves as the Lead Component Engineer within the Global Fleet Care division under the newly formed Boeing Global Services (BGS). Before transitioning to BGS, David served as the 787 Engineering Airline Support Account Manager for American Airlines, United Airlines & multiple international airlines from 2014 through 2016. In this role, David managed over 20% of the 787 world-wide fleet. Since his entry into Boeing in 2012, David has enjoyed the opportunity to work with business leaders and innovators, both here at home and around the globe.

David currently resides in Bellevue, WA with his wife Lauren. The two met during their time at the University of Arizona, and later married in March of 2016.